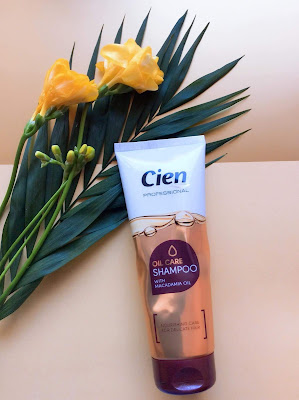 It’s been a while since I began testing Cien Professional Oil Care Shampoo with macadamia oil. It promised nourishing care for delicate hair and I have to admit I was kind of reluctant in trying it because I often develop dandruff at changing shampoos. Another worry I had before using it was that I lately had been using a very classic and basic hair mask composed of olive oil mixed with castor oil. It helped me in the past so I returned to using it. However, the use of so many oily products raised fear that my hair will end up being very, well, oily. And the last thing you want after washing your hair is to be oily.
At first I applied it to remove my mask and it did a good job. I also tried it without having any mask on it to reach a more exact conclusion and witness something weird. After the application and rinsing I was surprised to see it did not make my hair tangled and seemed like I had already used a conditioner. My happiness did not last long because after drying my hair, it became rather tern. Its duplicity confuses me.On the other hand, the thing I feared in the beginning did not happen. I did not developed dandruff and was a bit surprised that a shampoo so cheap could be so gentle to my hair.
The package is nice and the gold of it gives you the vibe of something expensive. When I first saw it, I liked how squishy it was, but after applying it regularly it was disappointing because every push left its mark. It ended up being a little difficult to get it out and the package looked harmed. The thing that impressed me was the actual product. It has a white color with pearl reflections and it’s very enjoyable to look at. The smell is beautiful too; it does not smell like any other product from their brand. It is sweet, but it does not suffocate you. And it does make a decent amount of foam.
Pro:
-          It has nice smell and color;
-          I did not develop dandruff, but I guess that depends on everyone’s type of hair;
Cons
-          For an oil based shampoo, it leaves your hair rather dry;
-          You have to struggle a little with the package, especially when you don’t have much product left.
Until next time, wash well.