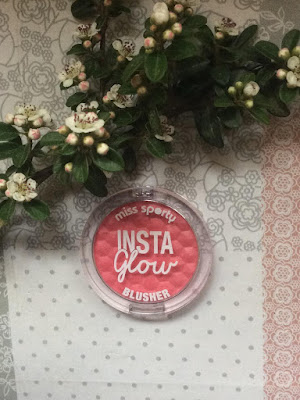 Blush has been an important trend lately; the rosy or peachy cheeks were enhanced more and more. Miss Sporty has affordable and joyful products, but we got to try more to see if they are worth the money and time.

First of all, the package is simple, a common plastic case. The pattern of the blush, however, resembles with a honeycomb and that’s really cute. In addition you can see the particles of glitter so it either worries you that you’ll sparkle too much or excites you.

The shade I purchased is 004 Glowing Mauve. I think of myself as pretty good at identifying colors so in my opinion it’s rather pink not mauve. The pigment is really good, even got scared because when I applied for the first time got myself some cheeks that looked like a clown. You don’t have to use much to get the desired effect rapidly. 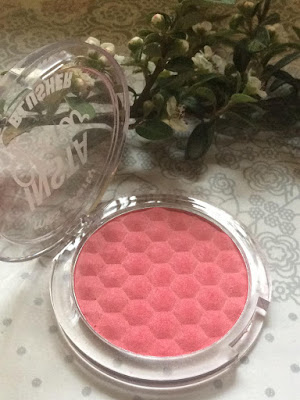 On the other hand, the glitter that was visible has a more aesthetic effect rather than a practical one. You don’t have to be worried about using your highlighter, this blusher doesn’t shine that much. In a way, I’m more on the side of blushers that don’t shine, what’s the magic of highlighter than? Sure, the highlighter is used on other parts of the face as well, but speaking about the cheeks area, everybody should do their business and not interfere in other’s jobs. Just like in life, right?

Everything is okay about this blush; it does its job and looks cute, what more could you ask? Well, I’m unsatisfied with just one thing about it which is the smell. It smells like old make-up and I don’t have it for much time.

Cons:
- It’s just my guess, but I think that if you drop it on the floor you might say goodbye to it.
- The smell isn’t appealing at all.

Take care, darlings and until next time blend well. You can also share your opinion on this product or the products you’re currently using in the comments below.
A.