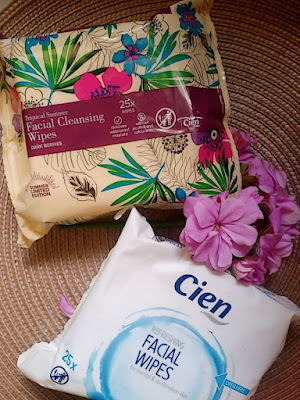 Began using facial wipes not long ago because they are convenient in removing make-up faster. Firstly I bought the standard version from Lidl, the Cien Refreshing Facial Wipes for normal & combination skin. A few days later I saw they even had a summer edition and decided to buy them too and see which one was better.

Both contain 25 pieces and as I was writing this I was reading their packages and stumbled upon something both curious and upsetting. Another similarity they have is that they are both meant to remove waterproof mascara, a test I had them take. After I used the Cien mascara, I used them to remove it and they both did a pretty good job.

While I was reading the ingredients and I saw that they were way too similar. Both of them contain almond oil and vitamin E and state they don’t have any alcohol and dyes. This raised my suspicions, could they be the same thing, only different package?

So I began searching for differences. The summer edition also has aloe vera and bisabolol, an ingredient used for calming the skin, especially the sensitive one. The thing that attracted me towards the summer edition was because I had a pleasurable experience in the past using the scrubs.

They clean decently the skin and leave it smooth. Of course, this is just a step in the cleaning process of the skin, but it’s a step that can make more enjoyable. The packages have good dimensions and are practical.

If I had to choose it wouldn’t be based on their power of cleaning, but on the smell. While the standard version has a nice, calming smell, remembering me of the Cien cream, the summer edition is more extravagant and has a strong dark berries smell. So for me the winner is the summer edition. That doesn’t mean I’m not going to use them both.

Until next time, take care of your skin.
A.