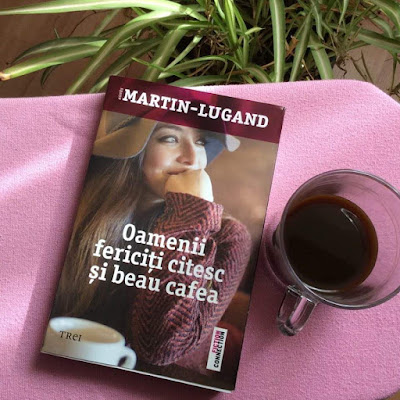 I was complaining about not having something nice to read and my dear friend became the savior. I've heard about this book from her before, but it passed a long time before I actually read it. It's the kind of delight you finish in two days, at least that's how much it took me.

It begins in a very sad note, the description of the sorrowful life of the heroine, the French woman, Diane. She has lost her family in a car accident, her husband Collin and her daughter Clara. She's still young, but she finds it hard to continue her life. From the first pages it makes you think about the awful situation of losing someone dear, no one really passes over something like that.

Along with Felix, the friend everyone should have, she is forced to get out of her state and most important her apartment. I'd like to say some words about Felix. He's the type of the delicious character that even if he's not in the spotlight, he leaves a good impression. He's Diane's partner in the coffee shop they own but has his own schedule and that's why their business hasn't got that much income. Him talking about his random love affairs is simply amusing, but despite his unstable timeline, he's the one that has an important role in Diane's healing.

The major step in Diane's new beginning is when she decides to got to Ireland, where her husband always wanted to go. She randomly picks a place there and off she goes. Seeing her adapt to a new house and new people is lovely. It's also a journey for the readers, you want her to succeed.

The real fun begins when she meets the owner of the house's nephew, Edward. He's also her neighbor. Haven't been this in love with an Edward since the Cullen. Don't get me wrong, he's far from the perfect guy to fall in love, he isn't the unlovable type either. He's a photographer who lives in solitude, with a gorgeous dog and straightforward way of speaking. Diane and Edward have several conflicts and they are all hilarious.

It's difficult to love again in Diane's situation and the obstacles are presents. The way she decides to solve things may not be on everyone's taste, but that's what I liked about the book, you learn to respect the decisions other make. I'd love to find out that this book has a second part.

Things I've learnt from this book:


She may not be the most lovable heroine, but once you get to know her she's adorable. And that's the same case for Edward. More than that, this book shows that there are not shortcuts for healing, but once the first step is taken, the vision isn't as blurry as before.

If you ever read this, enjoy.
A.